I have again been trolling through the Internet and thought I would write down about what I think are four great men’s films 🎥. Some people will disagree with me, but never the less it is just my opinion.
Most of these films can be found on Amazon to buy from about £5-£10. 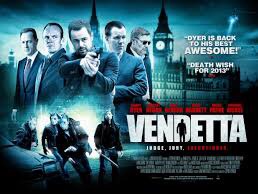 This stars Danny Dyer as a soldier and interrogator for the SAS, who goes AWOL from his platoon. He tracks down the people who killed his parents whilst be chased by police 👮 and the leader of his platoon in the SAS. The only disappointment is the ending leaves it open for a second one but nothing yet.

This film 🎥 stars ✨ as we can see Jason Statham. Who was a special forces recruited by 👮 police in his past. His wife gets murdered and he goes out for revenge who are the Russian Mafia and another Chinese Mafia. This all happens when he saves the life of a young Chinese girl who has a memory like a computer 💻. Great film all in all.

This is more the sci-fi style of film 🎥 with a difference. Action packed and in the film there are two bad guys with great fight action by Mike Bisping and Charles Lee. This is a film staring Noel Clarke and his character jumps time to the future and past due to other controlling forces. Great action fight scenes by all.

We all know Vin Diesel as Riddick. This is the second in the trilogy of films. There are great fight scenes in the film and an amazing story which is easy to follow. This is the one that makes any man want to be like Riddick, all hardcore and emotionless at times.
Well I hope you like what I have put up and remember it’s just my simple opinion.